His Death and Funeral 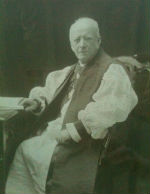 The Right Reverend George Francis Popham Blyth, D.D., passed peacefully to his rest at 97 Comeragh Road, West Kensington, on November 5th. The funeral service was held at St. Paul’s, Hammersmith, on November 7th, when representatives of the Archbishop of Canterbury, the Bishop of Kensington, the S.P.G., and the Order of St. John of Jerusalem were present. Also the Right Reverend the Bishop in Jerusalem, and Mrs. McInnes, the Vicar of the parish, the late and present Consuls at Jerusalem, Prebendary Ingram, and several dignitaries, clergy and workers in the Jerusalem diocese, including representatives of the J. & E. M., L.J.S., and CMS Societies.

The Bishop’s favourite hymn, No. 265, was sung, and at the close of the impressive service, the congregation followed the mourners to the cemetery.

His resignation of the Bishopric had taken effect on the 18th of the previous month.

The Bishop was born at Beverley on April 25th, 1832 so that he was 82 years of age when he died. He was the eldest son of the Reverend G. B. Blyth and Mary Frances Ann Popham, a niece of the Admiral Sir Home Popham, whose signalling code was used by Nelson at Trafalgar. He was educated at St. Paul’s School, and Lincoln College, Oxford, and took orders in 1855 and 1856.

After holding curacies in England, and acting as domestic chaplain to the Earl of Kimberley, he went out as government chaplain to Allahabad, in 1866. He was Archdeacon of Rangoon from 1879 to 1887. Archdeacon Blyth travelled to England about this time, via Jerusalem, and became strongly convinced of the unsatisfactory condition of English Church affairs there. A joint English and Prussian Bishopric had been established in1841, and for 40 years that arrangement continued. It however, never worked well. It offended the Eastern Orthodox Church, and caused English secessions to Rome. On the death of Bishop Barclay in 1881, no successor was appointed.

Appointment as Bishop in Jerusalem

Archbishop Benson sent the Archdeacon Blyth and questioned him closely regarding the then conditions, finally pressing the Bishopric on his acceptance. The new Bishop was consecrated on the feast of the Annunciation, 1887, in Lambeth Palace Chapel, as Bishop of the Church of England in Jerusalem and the East. Later he became a Sub-Prelate of the Order of St. John of Jerusalem, and he was the author of the Holy Week, and Forty Days.

Bishop Blyth has always been called Bishop in Jerusalem, not of Jerusalem; and his Archdeacons have taken their titles in the same form, which serves the purpose of emphasizing the fact that the Church of England does not, by serving her own people in the East, or undertaking missionary work there, desire to interfere with, or act in any antagonistic spirit towards, the National Churches, already existing in those countries. The late Professor Salmon used to lay down in his Divinity lectures the principle, that while in a sense the whole Christian Church is one, yet each separate nation has a right to possess its own National Church, with separate control and self-government. The history of the Eastern Church, more particularly that of Cyprus, has shown a constant struggle for the maintenance of this principle, as opposed to the claims of Rome : and Bishop Blyth, by acting on it in the spirit, and the letter, as he always did, won the full confidence of the native Churches. He always refused to proselytize : and as a result came constant proofs of good feeling. Prelates have offered to perform Christian rites for our people in the absence of our clergy, and quite recently to lend money to help to tide our people over a time of special trouble. In 1903, some 5,000 Orthodox Christians at Beyrout petitioned the English Bishop to take them over into the English Church, This he replied, he could not do, but he arranged, through his chaplain, special services for them until matters settled down. Eventually they obtained what they had been struggling for, viz., the appointment of the Bishop whom they desired ; and a schism in the Eastern Church was prevented.

We also owe gratitude for the width and depth of vision which enabled Bishop Blyth, in his missionary work, among Jews and Moslems, to retain their respect and affection, as well as the sympathy of thoughtful and educated men who do not favour every kind of Mission. The secret doubtless was sympathy, like that of St. Paul towards his Athenian hearers, when he described them as “very religious” or like his and St. Paul’s master who based His healing and evangelizing on the principle of love rather than the desire to win external converts.

Bishop Blyth succeeded in erecting a noble group of buildings at Jerusalem, in which the work he inaugurated was carried on. Also at St. Mary’s, Cairo, and at Haifa similar buildings have been erected. At Beyrout and in Cyprus churches and vicarage houses have become Church of England property.

The Suffragan Bishopric in Khartoum. With its handsome Cathedral, has been established, and a considerable sum has been raised towards the formation of another See.

There is every reason to believe that the changes which this sad war must bring about may result in making clear the need of an extended sphere for the activities of our Church in the near East, and then Bishop Blyth’s efforts towards the establishment of another See will probably meet with their reward.