Discover the Holy Land. A Travel Guide to Israel and Jordan

Discover the Holy Land. A Travel Guide to Israel and Jordan. 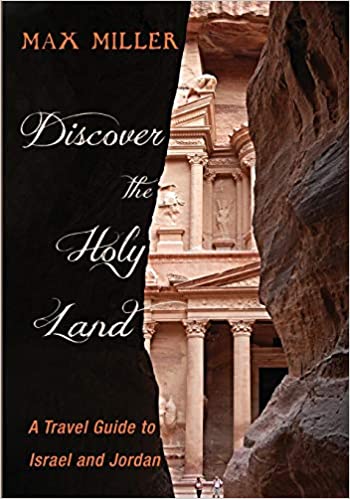 This informative and engaging travel guide to the Holy Land will be a very useful companion for anyone visiting Jordan, Israel and the Palestinian territories. In fact, it will be as useful beforehand and afterwards as it will be on the journey itself. Not a guidebook in the usual sense of the word (it doesn’t give you national holidays, restaurants or opening times of sites), nor a pilgrim manual (it doesn’t give you anything liturgical), it’s more a college student’s textbook for a Holy Land module. However, to have it with you en route will mean that you have much information about the Bible and the land and their connections, as well as some useful material about the modern political situation in the Holy Land.

Max Miller was Professor of Old Testament at Emory University and archaeologist for the Fernbank Museum of Natural History in Atlanta, Georgia, USA. He has been taking students to Jordan and Israel annually for over forty years. Reading this book in Essex during lockdown and knowing the Holy Land fairly well, I felt I was being transported through the places with a well-informed scholar and guide. Miller knows what he’s doing and I wished I’d had the privilege of being in one of his groups!

The author points out early on that we should think of the biblical ‘Holy Land’ as Israel, the Palestinian territories – and Jordan. The modern boundaries are different from those in the biblical period. His first two chapters are extremely useful for orientation, introducing some of the terminology used by archaeologists for periods of history, for example ‘Bronze Age’, the biblical ‘Iron Age’ and others such as ‘Hellenistic’ and ‘Byzantine’. Miller also gives a basic overview of the ‘lay of the land’ pointing out five geographical areas, crossing from west to east as follows: (i) the Mediterranean Coastal Plain; (ii) Galilee and the central Hill Country; (iii) the Jordan River Basin; (iv) the Transjordanian Highlands; and (v) the Syria-Arabian Desert. This simple information will help first-time visitors (and many who have been before) to get oriented quickly to the overall terrain.

The travel element begins in Amman, Jordan and goes to key places in that country including Jerash, Nebo and Madaba. It heads south through Machaerus (where John the Baptist was beheaded), Kerak and Shaubek to the ‘rose red city’ of Petra with all its mystique and romantic associations. After Wadi Rum and the memories of Lawrence of Arabia, Miller takes readers to Aqaba. The second main part of the book then moves over to Israel and the Palestinian territories. Beginning in Galilee, you will visit Sepphoris, Nazareth, Tabor, and other places on the way to Mount Carmel and Megiddo. Then, the major places associated with Jesus’ ministry around the Sea of Galilee. Up into the Golan Heights and you’re at Caesarea Philippi. And there are Old Testament and Crusader sites too: Hazor, Dan and Nimrod. Travelling south through Beth-shean, Samaria, Shechem, and Jericho, you reach Jerusalem encountering key locations such as the City of David, the Temple Mount, Mount Zion and the places associated with Jesus on the Mount of Olives.

The climax for Christians is surely the Church of the Holy Sepulchre (along with the Garden Tomb and Bethlehem). But there is still more: Emmaus (there are four), then Lodd or Lydda, Joppa or Jaffa and Caesarea Maritima with all the glory of Herod the Great’s port. The visit to Masada and Qumran brings the book to its geographical conclusion. A final chapter lays out briefly some of the modern political developments and terminology relating to Jordan, Israel and the Palestinian territories.

Skillfully weaving together biblical narratives and historical data from many different periods, Miller is a good story teller. The biblical sagas come alive and this is particularly true of the OT stories which might be less familiar to readers. A good sense of the geography of the land comes over and the author provides occasional directions including road numbers. There are succinct histories of modern excavations for archaeological sites.

There are also numerous colour photographs scattered throughout this book as well as black and white maps, and boxes of information, for example on the Nabateans and their capital at Petra, on Hezekiah’s Tunnel in Jerusalem, and on the history of the Druze people in the Golan Heights. The Stations of the Cross are also located on a map and an explanation given for each one.

In all, I found this to be a delightful read, bringing to life the places mentioned and providing just enough information for a first visit for those who want to know biblical, historical and contemporary information. The waterproof cover is a good idea although I found the overall size of the book a bit cumbersome. In any case, I strongly recommend Miller’s Guide to anyone going to the Holy Land – first-timers and old hands!