The Man Who Created the Middle East

The Man Who Created the Middle East. A Story of Empire, Conflict and the Sykes-Picot Agreement. 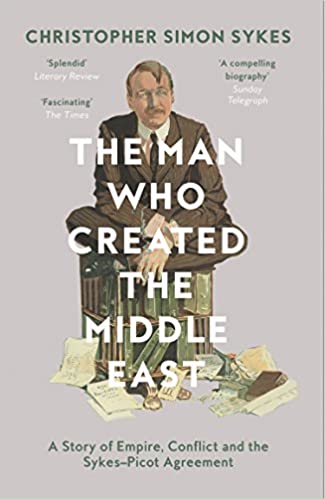 The Sykes-Picot Agreement of 1916 has been viewed with almost universal opprobrium since its inception. It was a secret treaty between the United Kingdom and France, with assent from the Russian Empire and Italy, which carved up the Turkish Ottoman Empire into their mutually agreed spheres of influence. In effect it meant that France became responsible for what is known as Syria and Lebanon, Britain for Palestine and Iraq. The hope was that by offering a single independent unified Arab state their support against the Ottoman Caliphate would be secured. The advent of the Balfour Declaration, in which Sykes was a key negotiator in 1917 promising a national home for the Jewish people in Palestine, led to the Arabs feeling betrayed so that problems resulted that are with us to this day.

But how could issues of such significance have been entrusted to diplomats and politicians of whom so little is known? Who was Sykes? This is the question on which this book sheds much new light. Based on 463 letters to his wife we gain a vivid and positive insight into the short life (he died in Paris of Spanish ‘flu in 1919 at the age of 40) of the subject of this interesting and entertaining biography written by his grandson.

Sir Tatton Benvenuto Mark Sykes or Mark as he was usually known, was born in 1879 to a wealthy and eccentric landowner also called Tatton who had married Jessie Cavendish-Bentinck, a girl somewhat younger than himself (by 30 years) because he realised the need for an heir to his vast estate at Sledmere in North Yorkshire. It was not a happy marriage so it is unsurprising that young Mark did not enjoy a happy childhood. His father did, however, take Mark travelling extensively in the Middle East, especially through the Ottoman Empire which aroused his interest and inspired him to write The Caliph’s Last Heritage. A Short History of the Turkish Empire .

Pursuing a political career, he made himself an expert in Turkish affairs. He was elected MP for Hull in 1911. He held various posts under Balfour and Lord Kitchener. Whilst never being as proArab as Gertrude Bell and T. E. Lawrence, he held pro-Zionist sympathies until changing his views in 1918 shortly before his death. He was in fact responsible for designing the flag of the Arab revolt, whose colours of green, red, black and white can still be seen in Middle Eastern flags today.

At home he pursued the lifestyle of a Yorkshire Grandee, breeding horses, sitting on the bench and fighting in the second Boer War, ultimately attaining the rank of Lt. Colonel in the Green Howards. He had become a Roman Catholic at the age of 3 and later on married a member of the same denomination, Edith Gorst, with whom he had six children and enjoyed marital bliss so different from his own parents. His letters are full of warmth, affection and humour, and reveal his talents as a cartoonist and cartographer. He was also a brilliant mimic.

His friends included F.E. Smith and Hilaire Belloc, and Gladstone wrote of him concerning his work for all the people of the Middle East, ‘The whole of his time was devoted to promoting the welfare of the people.’ Gertrude Bell and he, however, did not enjoy so harmonious a relationship (pp. 145 and 150).

The final third of the book is devoted to the Sykes-Picot Agreement and shows how Sykes’ views changed as he witnessed the growing tension between Arab and Jew. Field Marshall Sir Henry Wilson, the Chief of the Imperial Staff, wrote of Sykes, ‘He is a good fellow but cracked and his blessed Sykes-Picot Agreement must be torn up somehow’.