A History of the Bible. The Book and Its Faiths.

A History of the Bible. The Book and Its Faiths. 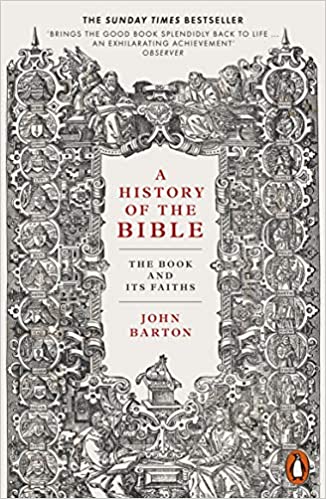 Seven years ago now, in the four hundredth anniversary year of the King James Version of the Bible, I was asked to preach on the phrase ‘a fly in the ointment’. It was one of a series of sermons, that term, picking up phrases that find their origin in the Bible, and in this case, the King James Version (KJV). John Barton, in his introduction to this remarkable volume indicates how the Bible remains a crucial resource not only to the Jewish and Christian communities at prayer, but also as one of the key documents which has had an impact on our culture. In this case, the origin of this well-used colloquialism appears to be in the first verse of Ecclesiastes 10, in the KJV ‘Dead flies cause the ointment of the apothecary to send forth a stinking savour.’ Barton’s book is unique in its approach and scope. It is set out in four main sections: The Old Testament, The New Testament, The Bible and Its Texts, and The Meanings of the Bible. And he opens up modern scholarship in an accessible manner inclusive to Judaism, Christianity and the non-believer.

Beginning with the first section of his book, Barton is careful to refer to the ‘Hebrew Scriptures’ in order to treat this material equally in relation to Judaism and Christianity, and thus to avoid a prevailing Christian supersessionism (the assumption that the New Testament has somehow ‘trumped’ the Hebrew scriptures which, of course, comprise the entire Bible for Jews).

The author begins with a careful summary of the history of the northern and southern kingdoms and of their encounters with their conquerors. In setting the scene, he also refers to developing approaches to the dating of the biblical material. Throughout the analysis, he is keen to indicate how, in recent decades, dating has tended to move later – some scholars even suggest that all the Hebrew Scriptures date from the second and first centuries BCE. He rejects this extreme view but does argue that earlier assumptions that some of the literature may be dated back to the ninth and eighth centuries BCE is now largely discredited. Some prophetic writing may date from the fall of the southern kingdom in the early sixth century BCE but most of the Pentateuch is likely to have been completed at a later date.

Barton approaches the interweaving of the assumed Pentateuchal sources J, E, D and P with care and clarity. He indicates how muddled passages make clear that different accounts have been conflated. Whilst he points to parallel scriptural material from Hammurabi and elsewhere in the ancient Near East, he also indicates how unique is the laconic prose literature of the Hebrew Scriptures. The Psalms with their poetic parallelism are also sui generis. Barton d e m o n s t r a t e s h o w different is the use made of the Hebrew Scriptures by Judaism and Christianity. For Jews, the Torah reigns supreme and the writings and prophecy are used to illuminate and interpret the Torah.

In moving into the New Testament era, we are reminded of the great contrast between the context of the two sets of documents. With the Hebrew Scriptures, the setting is that of the nation of Israel and the Scriptures play an important part in establishing the identity of Israel through its relationship with God. Emergent Christianity at this time effectively comprises a Jewish sect. Barton offers a masterly and concise account of the Jewish nation from the triumph of the Maccabees and brief period of independence, through to the time of the Jewish revolt and the fall of Jerusalem in 70 CE (and indeed to the later Bar Kochba rebellion in 130 CE, with the massacre at Masada occurring between these two). Josephus’ historical writings and the philosophical/ theological work of Philo are highlighted, as indeed is the increasing Hellenisation during this period. This would have a significant impact on the New Testament writings. Christianity, as it would become, was one sect amongst many; the key difference would be its embracing of the Gentiles.

The earliest writings of the New Testament are universally recognised to be the letters of Paul. These already indicate something of the energy released from belief in the Resurrection of Christ. Although Paul includes no narrative of the ‘empty tomb’ there is nonetheless an increasingly clear sense of a ‘high Christology’ and the beginning of talk of Christ’s ‘pre-existence’. Barton shows how the more recent ‘new perspective on Paul’ places emphasis on the admission of the Gentiles instead of a focus on individual salvation, implied by Luther’s concern with ‘justification by faith alone’. The likelihood of the later letters being pseudo-Pauline is included in a wider reflection on authorship in the New Testament. With the gospels we are introduced to the so-called four document hypothesis and the increasing uncertainty about the Q source; he describes the very different nature of John’s Gospel and its provenance from within a highly Hellenised Jewish community. This leaves him with the interesting question of what the gospels are for – teaching or proclamation.

Early on, in the time of Josephus, there was an emergent Hebrew ‘canon’; there was no Jewish ‘council’ or ‘synod’ to agree this and any sense of canon appears to have resulted from usage. The Apocryphal books at no point appeared in the accepted lists of the Hebrew Scriptures. They were largely later documents from a Hellenistic provenance. Indeed, what we now know as the Hebrew canon was largely accepted by the second and third centuries BCE, apart from Daniel, which had not been written until the mid-second century BCE during the oppression of Antiochus IV Epiphanes.

As has already been hinted there have been different perceptions of the Bible from Christians and Jews. Indeed, by the time of the ‘parting of the ways’ of what became two religions, in the early third century CE there evolved an interrelationship between two belief systems which unavoidably had its impact on differing understandings of the nature of the Scriptures. From this period onwards, Christians began to see what they now described as the ‘Old Testament’ as part of Christian Scripture – the title itself indicating supersessionism.

But how and when did the New Testament become seen as Scripture? Barton suggests three stages: first, its contents were agreed as fulfilling prophecy; second, they argued for the pre-eminence of Christ; and finally, there appeared to be a divine plan outlined by both Old and New Testaments. At this point too, issues of a New Testament canon began to rise in importance. Often it is suggested that the acceptance of the present collection of New Testament books did not occur until the fourth century CE. Barton is clear that the process began much earlier. The Festal Letter of Athanasius, the work of Eusebius of Caesarea, and the so-called Muratorian Fragment offer evidence. At this time too, other possible candidates were excluded, notably: the Didache, the Epistle of Barnabas and the Shepherd of Hermas. Irenaeus’ Adversus Haereses was crucial in the late second century in setting the limits to Scripture. Barton accepts, however, that the use of canonicity was not common currency until the fourth century.

He gives a clear account of the various manuscripts lying behind the Bible as we know it. The earliest edition of the Hebrew canon, until the discovery of the Dead Sea Scrolls in 1947, was the Leningrad or St. Petersburg Codex. Remarkably, the Dead Sea documents show an amazing identity with this document of one thousand years later. Hebrew Scriptures in early times were written on scrolls and the New Testament books on codices, the forerunners of books as we know them.

In his concluding section on the meanings of the Bible, Barton develops something of the differences which had begun to arise both following and immediately before the ‘parting of the ways’ between Judaism and Christianity. In an interesting introduction to this, he quotes from the bidding prayer from the annual King’s College, Cambridge Festival of Nine Lessons and Carols. In beautifully simple prose, the Bible is shown to describe the arrival of the Messiah and thereafter the reversal of Adam’s sin by Jesus, the second Adam. Old and New Testaments are both brought to bear. In Judaism, however, he notes that a quite different story is being told, beginning with Abraham and the occupation of ‘the Land’, and continuing with the Torah teaching how a faithful life may be lived; there is no reference to ‘original sin’. There is no ‘one overarching story’ for Jews.

This approach resulted from the birth of synagogue worship, and Barton accepts that there was some sense of story behind the Scriptures in the period before the emergence of Rabbinic Judaism in the late first century BCE and the first century CE. Rabbis developed commentary on Scripture though halakhah (rules for ordering one’s life) and aggadah (narratives assisting community living). This involved the writing of midrash, a form of commentary on the Torah, which also seeped into the early Christian Scriptures. Allegory or typology might be used and were certainly popular too with Origen and the Alexandrian School in the third century of our era.

There have been different attitudes to the study of the scriptural texts in both Judaism and Christianity. Judaism has largely avoided critical study until relatively recently – and in the east, Christianity also avoided academic study of the text opting instead for the early allegorical use of the text as with Origen. The Reformation brought a new interest in the text, with pressure to translate into the vernacular. Doctrinal considerations affected the process alongside this. Then came the Enlightenment: here Barton focuses particularly on the work of Spinoza, a devout but deistic Jew who developed a new view of the genres and origins, showing a healthy scepticism throughout. This would lead eventually to the ‘historical criticism’ of nineteenth-century scholars. The late twentieth century saw a shift towards literary criticism.

It is impossible to do justice – even in this extended review – to the detail and extraordinarily wide-ranging scholarship and indeed careful conclusions set out most interestingly in Barton’s final piece on ‘The Bible and Faith’. His own position is well summarised in the piece from the sixteenth century Anglican scholar, Richard Hooker, which he quotes at the beginning and the end (pp.13 and 489):

‘....as incredible praises given unto men do often abate and impair the credit of their deserved commendation, so we must likewise take great heed, lest, in attributing unto Scripture more than it can have, the incredibility of that do cause even those things which indeed it hath most abundantly, to be less reverently esteemed.’