Cyprus And the Gulf Book Review

The Anglican Diocese of Cyprus and the Gulf. The Unfolding Story.  By Angela Murray  (Gilgamesh Publishing, 2020) - Purchase the book from Amazon (£39.95) 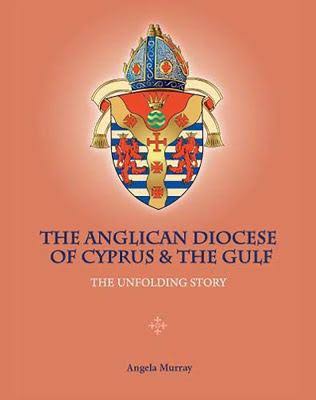 In 2015, Bishop Michael Lewis, the Bishop of Cyprus and the Gulf, invited me to spend a sabbatical researching the history of his diocese. In a diocese largely made up of expatriates, where there is sometimes a lack of institutional memory, it was felt important to record some of the Diocese’s extraordinary story. While working on the project, I met Angela Murray, a member of St Christopher’s Cathedral in Bahrain, who had written several books on the history of the Middle East. I was delighted when Bishop Michael asked Angela to develop the project into the impressive and comprehensive work that she has now published.

The Anglican Diocese of Cyprus and the Gulf. The Unfolding Story runs to 470 pages. Of these, roughly a third describe the origins of the diocese, setting it in the context of the often-complex politics and ecclesiastical landscape of the region. Canon Murray ably navigates the many forces that contributed to the diocese’s creation in 1976 as part of the new Province of Jerusalem and the Middle East. Apart from the desire of individuals to practice and share their faith, these forces included Britain’s colonial involvement in the region and the development of the oil and shipping industries. The differing contexts of Cyprus and the countries of the Gulf, mean that different chaplaincies developed in varied ways and Canon Murray manages to reflect these differences while telling a very engaging story. Along the way we learn of the transformation of the Gulf, and the impact of the conflict in Cyprus and of the two Gulf Wars. This is a story of amazing faithfulness and resilience in the face of often very challenging circumstances.

The Diocese of Cyprus and the Gulf is one of the largest in the Anglican Communion, and it includes a wide variety of countries and ethnicities. Inevitably, variations in both the quantity of source material and political sensitivities mean that there is more information on some parts of the diocese than others but Angela manages to create a great sense of a cohesive whole. Much of this comes through the stories of the diocese’s pioneering bishops and archdeacons but around them we meet a vast array of faithful individuals and congregations. I was particularly struck by the story of Julia Lewis, the wife of Archbishop Michael, and her visit to the housemaids of Sharjah. Many of the stories of particular churches are told through their buildings which can have enormous significance in the different landscapes in which they are set. Large numbers of them are places of encounter and hospitality, providing space for worship to far more congregations than the Anglican ones that helped to build them.

This book will be of great interest to former residents of the region and visitors, missiologists and Friends of the Diocese as well as the readers of Bible Lands. It is an invaluable resource both to those who want to recall the history of a particular church and those who would like a better understanding of the Christian presence across the region. As Archbishop Michael said at the book’s London launch at All Hallows by the Tower in February, this is a great book for those who love lists. Canon Murray has a great attention to detail and has meticulously reproduced very detailed lists of all the clergy and readers who have served in the diocese and of all the canons of its two cathedrals (Nicosia and Bahrain). She has also populated her work with some wonderful photos, both old and new. This is no dry work of reference but a real joy to read. When I first met Angela, this work was conceived as a means of marking the diocese’s fortieth anniversary in 2016. It obviously grew as a project into the remarkable work we have today. Rather than presenting itself as a milestone achieved, however, this history underlines the provisional nature of the diocese in the providence of God and the need for it to keep evolving. The world is facing great changes and so is the Province of Jerusalem and the Middle East. This book provides a useful point of reference – an important marker in what continues to be an unfolding story.

Read this and other articles in Bible Lands Summer 2020 Edition